ConceptNet 5.7 has been released! Here’s a tour of some of the things that are new.

This group, from Carnegie Mellon and Kyoto University with support from Yahoo! Japan, combined translation and crowdsourcing to collect 18,747 new facts in Japanese, covering common-sense relations that are hard to collect data for, such as /r/AtLocation and /r/UsedFor.

You can read the details in their COLING paper, “Cross-lingual Knowledge Projection Using Machine Translation and Target-side Knowledge Base Completion“. 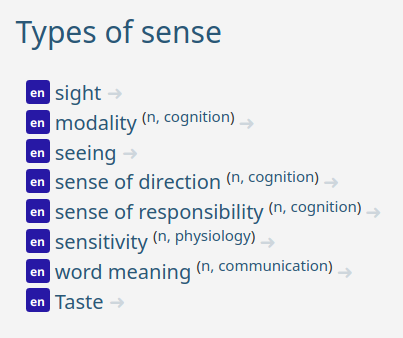 Sometimes multiple different meanings happen to be represented by words that are spelled the same — that is, different senses of a word. ConceptNet has vaguely supported word senses for a while, and now we’re making more of an effort to actually support them.

In earlier versions, we only distinguished word senses by their part of speech: for example, the noun “sense” might be at the ConceptNet URI /c/en/sense/n. Now we can provide more details about word senses when we have them, such as /c/en/sense/n/wn/communication, representing a noun sense of “sense” that’s in the WordNet topic area of “communication”.

Of course, a lot of ConceptNet’s data comes from natural language text, where distinguishing word senses is a well-known difficult problem. A lot of the data is still made of ambiguous words. But when we take input from sources that do have distinguishable word senses, we include information about the word senses in the concept URI and in its display on the browseable ConceptNet site.

Specific word senses always appear in a namespace, letting us know who’s defining that word sense, such as WordNet, Wiktionary, or Wikipedia.

ConceptNet 5.7 is powered by PostgreSQL 10, and between the browseable site and the API, it is queried over 250,000 times per day.

Previously, we had to write carefully-tuned SQL queries so that the server could quickly respond to all the kinds of intersecting queries that the ConceptNet API allows, such as all HasA edges between two nodes in Japanese. Some combinations were previously not supported at all, such as all statements collected by Open Mind Common Sense about the Spanish word hablar.

Some of the queries were hard to tune. There was some downtime on ConceptNet 5.6 as users started making more difficult queries and the database failed to keep up. The corners we cut to make the queries efficient enough showed up as strange artifacts, such as queries where most of the results would start with “a” or “b”.

With our new database structure, we no longer have to anticipate and tune every kind of query. ConceptNet queries are now converted into JSONB queries, which PostgreSQL 10 knows how to optimize with a new kind of index. This gives us an efficient way to do every kind of ConceptNet query, using the work of people who are much better than us at optimizing databases.

Those are the major updates we’ve made to ConceptNet, so I’d like to wrap up by discussing why it’s important that we continue to maintain and improve ConceptNet. It continues to play a valuable role in understanding what people mean by the words they use.

In this area where it seems that machine learning can learn anything from enough data, it turns out that computers still do gain more common-sense understanding from ConceptNet. In the story understanding task at SemEval 2018, the best and fourth-best system both took input from ConceptNet. We previously wrote about how our ConceptNet-based system was the second-best at another SemEval task, on recognizing differences in attributes. In November 2018, the new state-of-the-art in the Story Cloze Test was set by Jiaao Chen et al. using ConceptNet, outperforming major systems such as GPT.

If you’re using ConceptNet in natural language processing, you should consider applying to the Common Sense In NLP workshop that I’m co-organizing at EMNLP 2019.